Congratulations to Anne Ryan, one of our star agents in the Wyckoff, NJ office, who has been voted second place as “Best Realtor” for (201) Magazine’s 13th Annual Best of Bergen Poll.

As a lifelong resident of Bergen County, Anne has extensive knowledge and understanding of the cities and municipalities in the area and is an expert on what each has to offer. Her familiarity with Bergen, Hudson, Passaic, Morris and Essex counties makes her a top choice for anyone making the move to New Jersey.

This honor is well deserved for Anne, who prides herself on the fundamental principles of honesty and professionalism. These two principles have helped Anne form successful client-agent relationships with both buyers and sellers. In addition to having a “sixth sense” for assessing her client’s wants and needs — Anne also attributes her success to a strong work ethic, knowledge of the industry, attention to detail and her commitment to quality customer service.

“I could not be more thrilled to receive this tremendous honor,” says Anne. “It means so much to me to be recognized by my community and included in this prestigious poll. I could not have done it without the support and trust of my family, friends, and clients. Without the continued support I receive day in and day out and the ongoing referrals, I would not be where I am today.”

Man, do I hate saying that. As I’ve explained before, I hate the phrase “great time to buy,” for a couple of reasons.

Second, while markets tend to move together, we do see micro-markets (i.e., towns and villages) that defy larger trends. So while it might be a great time to buy in Village A, it might be not so great in Town B.

Third, and most importantly, though, “it’s a great time to buy!” just seems like a hack thing to say, the kind of thing that TERRIBLE real estate agents have said for generations to get unsuspecting and gullible people to buy an overpriced home. And I think that most people get suspicious when real estate agents talk like that.

Specifically, I want to make this specific point: the monthly payment you need to buy an inflation-adjusted average priced home in Northern New Jersey is as low as its been in a generation.

Take a look at these graphs for Bergen and Passaic Counties, and you’ll see what I mean: 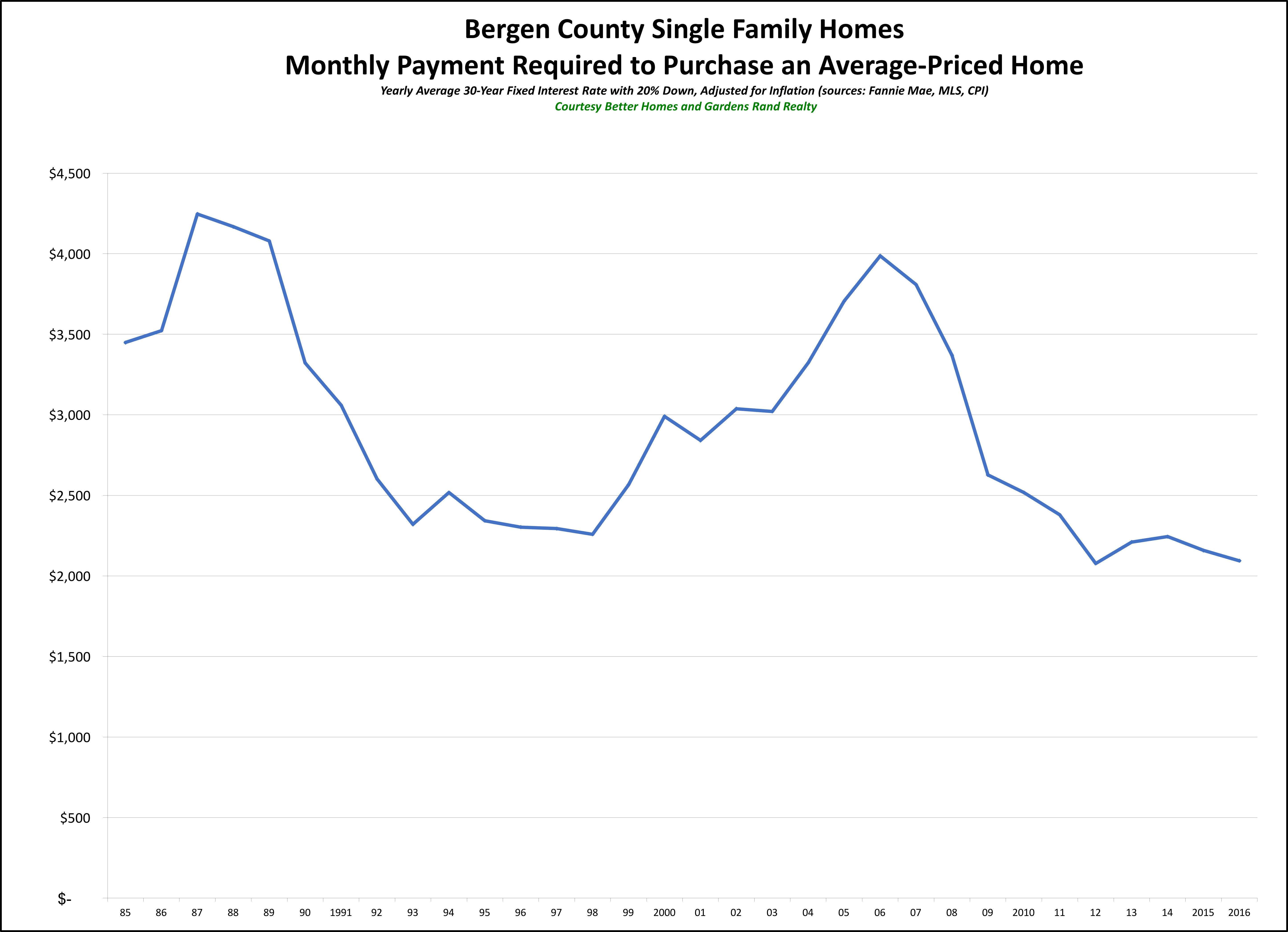 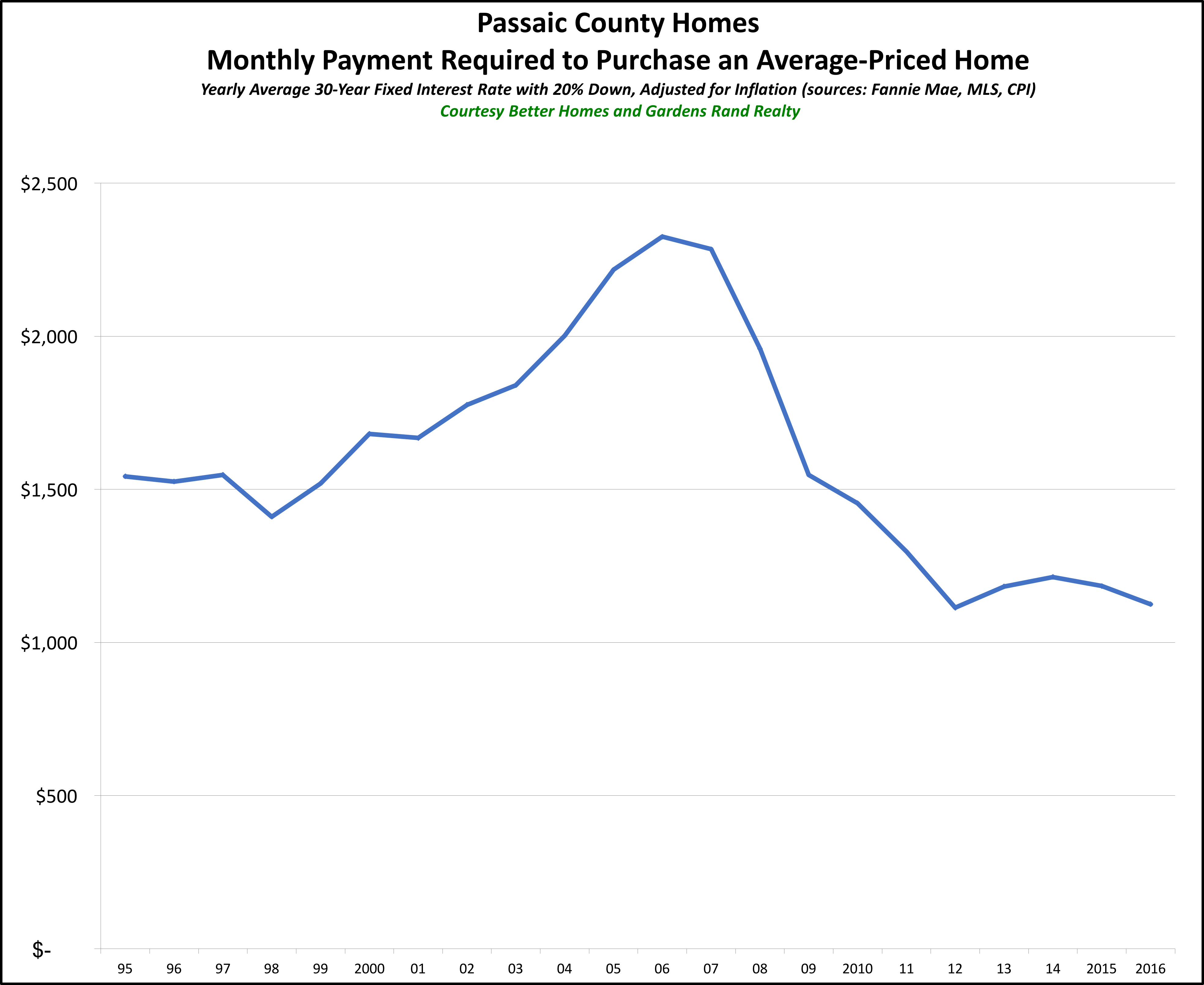 You can see the results on the graph. The monthly payment you have to make to purchase the average-priced home in Bergen or Passaic is just about as low as it’s been in years. We saw the slightest uptick from 2012-2014, partially because of a slight increase in pricing and a slow inflating of interest rates. But the payment came down again over the past two years, with rates falling and prices stalling.

Generally, though, we’re talking about a monthly payment that is as low as anytime in the past 30 years – and as low as it was in the mid-1990s, during a crippling buyer’s market. We don’t have data going back in Passaic as far as we do in Bergen, but there’s no reason to think that the markets behaved differently during the 1980s.

So why are monthly payments lower than they’ve been in a generation? A couple of reasons:

3) Rates. But the biggest reason we’re seeing monthly payments lower than they’ve been in a generation is that rates are still at historic lows. After all, about ten years ago, the average interest rate was about 6%. For the past few years, it’s been below 4%. That’s a huge difference in your monthly payment.
Again, I HATE it when real estate professionals say that “this is a great time to buy,” because at many times in our history that has been bad advice.

So I’m not going to tell you what to do. That’s not my job. But if you’ve been thinking about buying a home, I think these graphs speak for themselves.