I have always hated it when real estate professionals say “it’s a great time to buy.”  It always seems so self-serving, and I know it immediately causes suspicion.

So I’m not going to SAY that it’s a great time to buy a home right now. I’m just going to show you.

Specifically, I’m going to show you that the monthly payment you need to make to buy an averaged priced home in Northern New Jersey is about as low as it’s been in a generation.

Think about what I’m saying for a second. I’m NOT saying that homes are cheaper than they’ve ever been. That’s not true. Depending on the year, homes have appreciated, and if you go back more than 15 years, they’ve appreciated pretty dramatically. I’m just saying that the MONTHLY PAYMENT you need to make to buy the AVERAGE PRICED HOME is lower right now than it’s been in a generation — that is, if you control for inflation.

Take a look at these graphs for Bergen and Passaic Counties, and you’ll see what I mean: 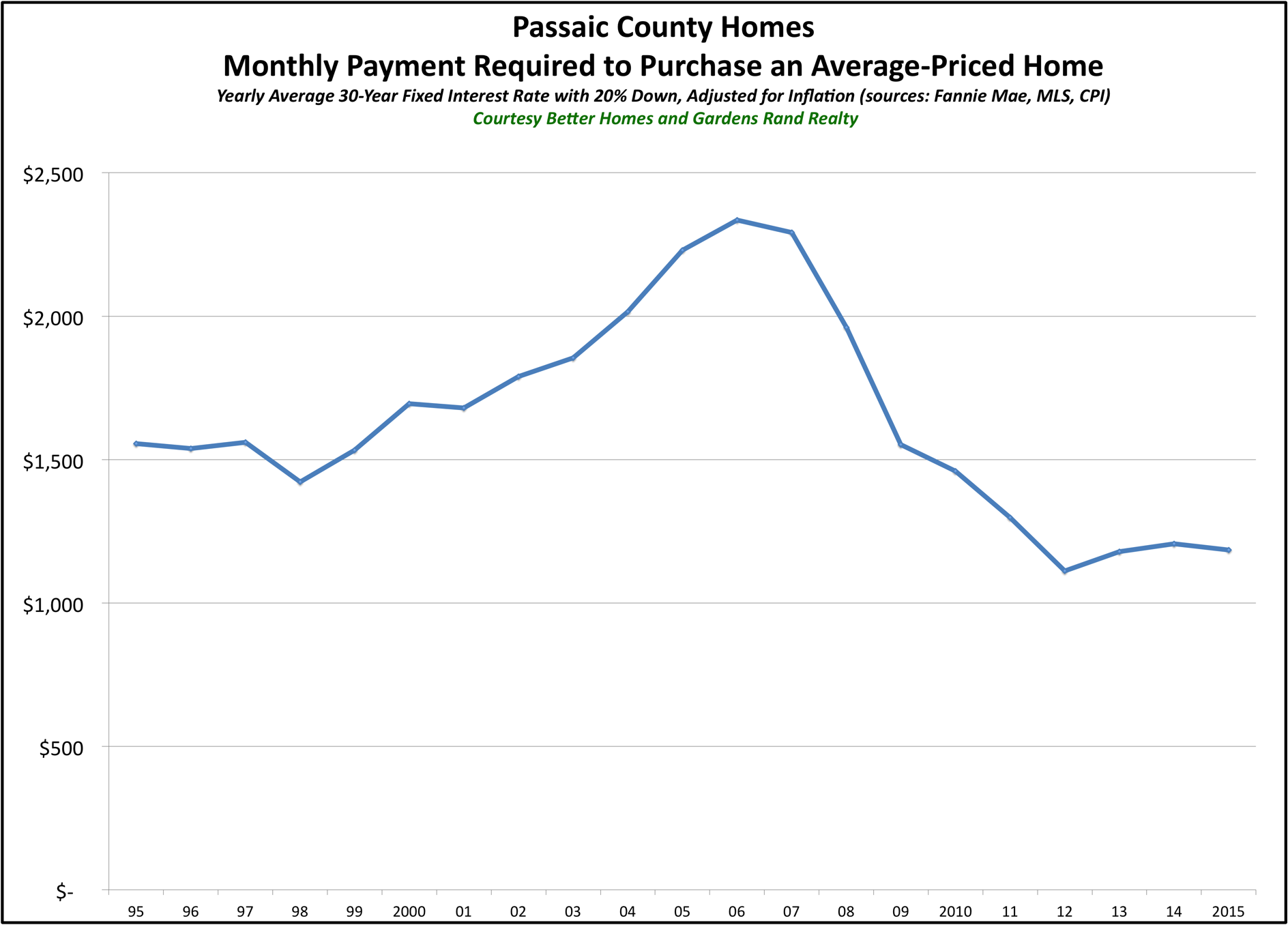 You can see the results on the graph. The monthly payment you have to make to purchase the average-priced home in Bergen or Passaic is just about as low as it’s been in years. We saw the slightest uptick from 2012-2014, partially because of a slight increase in pricing and a slow inflating of interest rates. But the payment came down again in 2015, with rates falling and prices stalling.

Generally, though, we’re talking about a monthly payment that is as low as anytime in the past 30 years!

Why? Part of it is that we have not seen prices go up in any measurable way in almost 10 years, during which inflation has reduced the “true” cost of purchasing a home.

But more importantly, rates are significantly lower than they’ve been at any time in modern history. After all, about ten years ago, the average interest rate was about 6%. It’s now below 4%. That’s a huge difference in your monthly payment.

Again, I HATE it when real estate professionals say that “this is a great time to buy,” because at many times in our history that has been bad advice. But if you measure a “great time to buy” by looking at the monthly payment you’ll have to make to buy a home, then we’re talking about as good a time to buy as any in the past decades. Prices have been flat for almost 10 years, and they’re down significantly if you factor in the effects of inflation. And interest rates are still as low as we’ve ever seen them. Unless we see some major shock to the economy, I think we’re looking at a near-decade of reasonable price appreciation coupled with increasing interest rates – both of which are going to drive that monthly payment up over the next few years.

Joe Rand is one of the Managing Members of Better Homes and Gardens Real Estate | Rand Realty, and compiles and writes the Rand Quarterly Market Report.