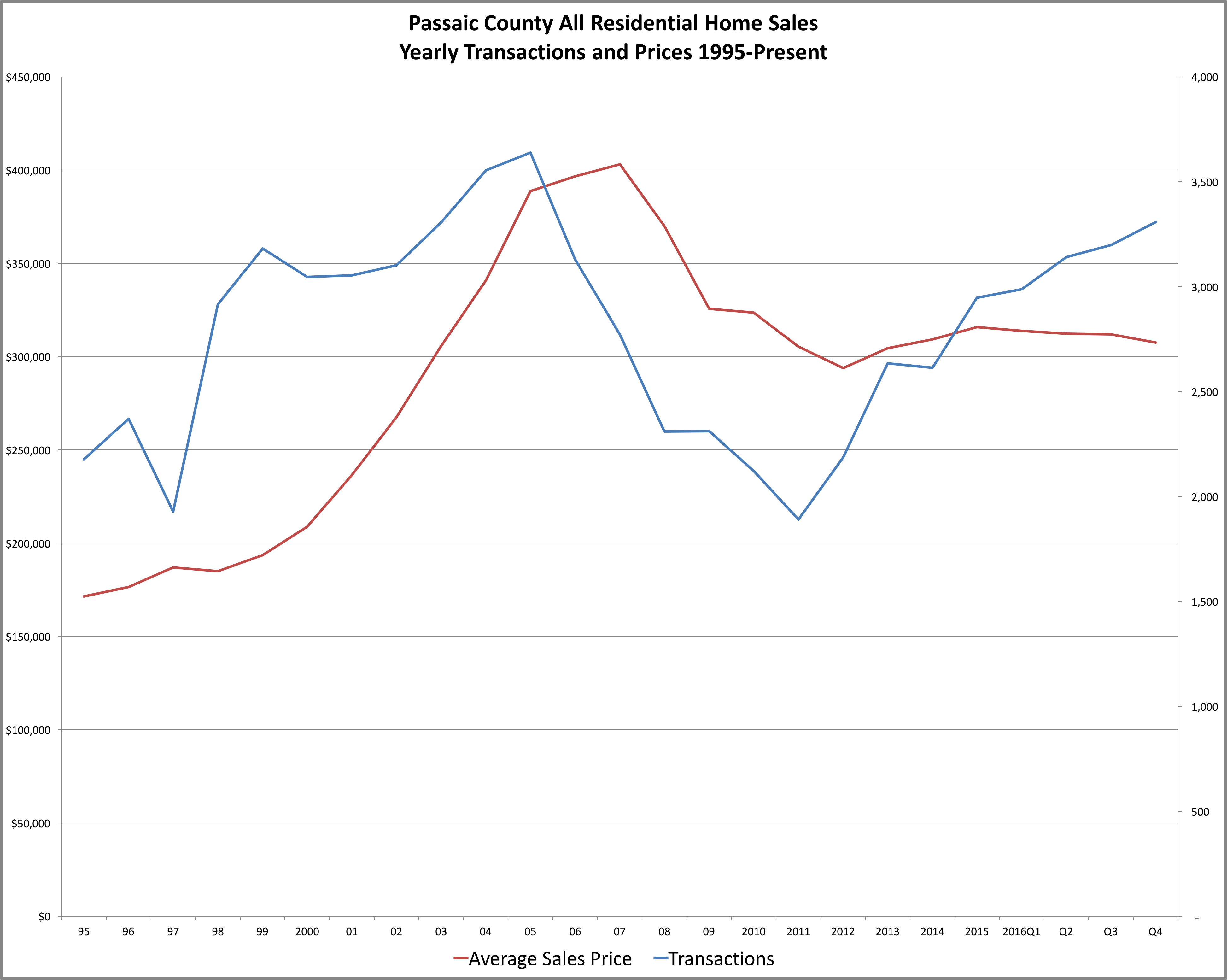 Sales in the Passaic County housing market rose again in the fourth quarter of 2016, but they are still not having their expected impact on pricing

Sales. Passaic sales finished the year strong, rising almost 14% from last year’s fourth quarter and finishing the year up over 12%. We’ve now seen sustained increases in buyer demand for over five years, with quarterly sales up in 20 out of the last 22 quarters. As a result, Passaic closed almost 3,300 homes for the calendar year, the highest total we’ve seen in over 10 years, since the height of the last seller’s market.

Prices. Unfortunately, these sustained increases in buyer demand are not yet impacting pricing. Prices were down fairly sharply for the quarter, falling over 5% on average and almost 3% at the median. And that finished off a calendar year where prices were down almost 3% on average and 1% at the median. This is surprising, because we would normally expect sustained increases in buyer demand to drive meaningful price appreciation. It may just be a matter of time, but basic economic principles would indicate that increasing demand, coupled with declining inventory, should drive prices higher.

Inventory. The Passaic inventory of available homes for sale fell again, down over 22% from last year’s fourth quarter. We measure “months of inventory” by calculating the number of months it would take to sell all the available homes at the current rate of absorption, and generally consider anything below six months to signal a seller’s market that would normally drive prices up. So the fact that Passaic is now down to just over eight months of inventory is important, since it presages the possibility of price appreciation in 2017.

Negotiability. The negotiability indicators indicated that sellers are gaining leverage with buyers. The days-on-market were down sharply, falling 15 days from the fourth quarter of last year and now down to under five months of market time. The listing retention rate was relatively flat for the quarter, but up to almost 97% for the year. If the market tightens, we would expect that homes would continue to sell more quickly and for closer to the asking price.

Going forward, we believe that Passaic’s fundamentals are sound, with homes priced at relatively attractive levels, rates near historic lows, and a stable economy. Accordingly, we expect these sustained levels of buyer demand, coupled with declining inventory, to finally drive meaningful price appreciation in 2017.