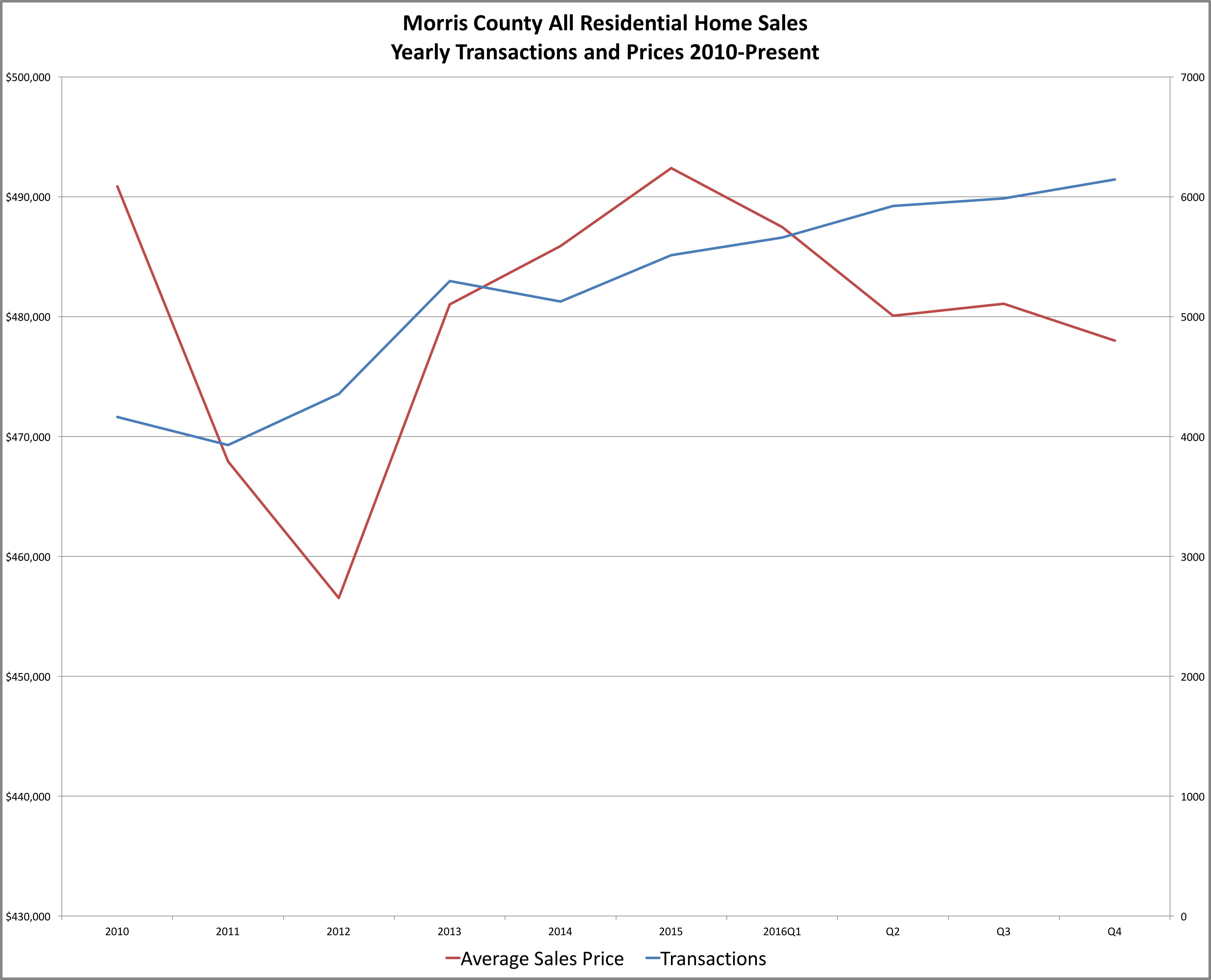 The Morris County housing market finished the year with a sharp increase in sales, but sustained buyer demand throughout 2016 still has not had a significant impact on pricing.

Sales. Morris County sales were up significantly, rising almost 12% from the fourth quarter of last year. This continued a streak in which year-on-year sales have now gone up for nine straight quarters, over two years of sustained buyer demand. Transactions were also up 12% for the year, and are now up about 56% from the bottom of the market in 2011. So sales have now been strong for several years, indicating that buyer demand is growing.

Prices. All this sales activity, though, has not yet had its expected impact on pricing. Prices were mostly mixed for the quarter, falling over 2% on average even while the median was flat. For the year, prices were stubbornly resistant to the increasing buyer demand, falling almost 3% on average and 1% at the median. This was surprising and disappointing, particularly after the modest price appreciation that we saw in 2015.

Inventory. Morris inventory fell again, dropping over 26% from last year’s fourth quarter and now down to 7.3 months. We measure “months of inventory” by calculating the number of months it would take to sell all the available homes at the current rate of absorption, and generally consider anything below six months to signal a seller’s market that would normally drive prices up. So the fact that Morris inventory is now down to just over seven months of inventory could indicate that we will see meaningful price appreciation next year.

Negotiability. The negotiability indicators showed signs that sellers might be gaining leverage with buyers. The days-on-market indicator was down by nine days, falling almost 7%, indicating that homes were selling more quickly. And the listing price retention rate continues to rise, now up to just under 97% for the quarter and the year, signaling that sellers might be having a bit more success getting buyers to meet their asking prices.

Going forward, we expect that Morris County’s sales activity will eventually have a meaningful impact on pricing. With homes still at relatively affordable 2004 prices (without even adjusting for inflation), interest rates low, and a generally improving economy, we believe that reduced inventory coupled with rising buyer demand will drive price appreciation through 2017.