So What’s Going on in the Market?: The Rand Quarterly Market Report for Westchester and the Hudson Valley Region for 2015Q2 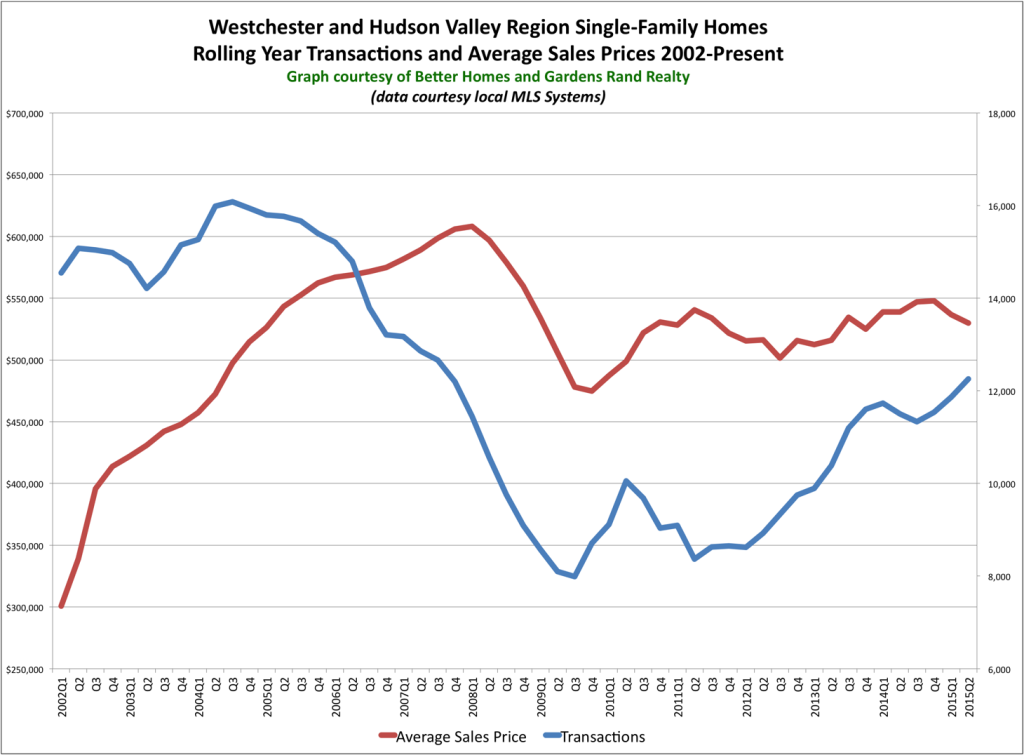 This week, Better Homes and Gardens Rand Realty is releasing its Quarterly Market Report for all the counties it services: Westchester, Putnam, Rockland, Orange, and Dutchess Counties in New York; and Bergen, Passaic, and Morris Counties in New Jersey. Below is an excerpt from the report, but you can get the full Report here.

The real estate market in Westchester and the Hudson Valley surged in the second quarter of 2015, with sales spiking throughout the region. But even with transactions reaching highs that we have not seen in almost ten years, pricing remains stubbornly flat or even down in most of our local markets.

Home sales were torrid, rising almost 15% throughout the region. This continued a trend we’ve seen for most of the last year, marking the third straight quarter of year-on-year sales increases. And the results were impressive not just in comparison to a relatively tepid 2014, with the 3,070 second quarter sales and the 12,258 rolling year sales representing the highest totals since 2007, at the tail end of the last seller’s market. More importantly, the surge was widespread, with sales up sharply in every county in the region: rising 15% in Westchester, 18% in Putnam, 10% in Rockland, 31% in Orange, and 21% in Dutchess. Clearly, buyer demand has come back to the region at levels we have not seen in almost ten years.

This surge in buyer demand did not, though, have its expected impact on pricing, with regional prices down 5.5% from last year. Now, that does not necessarily mean that the average home in the region declined by over 5% in value. Rather, some of the decline is simply a change in the mix of properties sold – after all, if you look at the sales increases listed above, you can see that we saw the strongest results in the lowest-priced counties like Orange and Dutchess. Indeed, we saw the same kind of results within each county, with most of the areas showing more strength in the lower-end of the market. So part of the reason for the decline in pricing is simply that the market was more heavily weighted down by lower-priced homes.

But the main reason for the continued sluggishness of pricing is simply that we are still working our way out of the 2008-2011 market correction. As we have noted before in this Report, it takes time for changes in buyer demand to have an impact on pricing. For example, if you look at the accompanying graph displaying regional sales and prices going back almost 15 years, you can see that sales topped out and started falling sometime in 2004-05, but prices only started to come down in 2008. In other words, it took almost four years for a decline in buyer demand to have an impact on pricing. Similarly, we have argued that it will take several years of increasing demand to start driving prices back up – and you can see that sales only started to climb back up in 2012 or so. So we’re not necessarily surprised that prices are still bouncing around at the current levels.

Going forward, we believe it’s only a matter of time before these sustained increases in buyer demand have an impact on pricing. We’re now going into our fourth year of mostly sustained increases in sales, and basic market economics tells us that increasing demand coupled with stable supply is eventually going to drive prices up. And given that we’re seeing homes at relatively affordable levels, interest rates near historic lows, and a generally improving economy, we think that meaningful changes in price appreciation in the region are imminent.