So What’s Going on in the Putnam County Real Estate Market?: The Rand Quarterly Market Report for 2015Q2 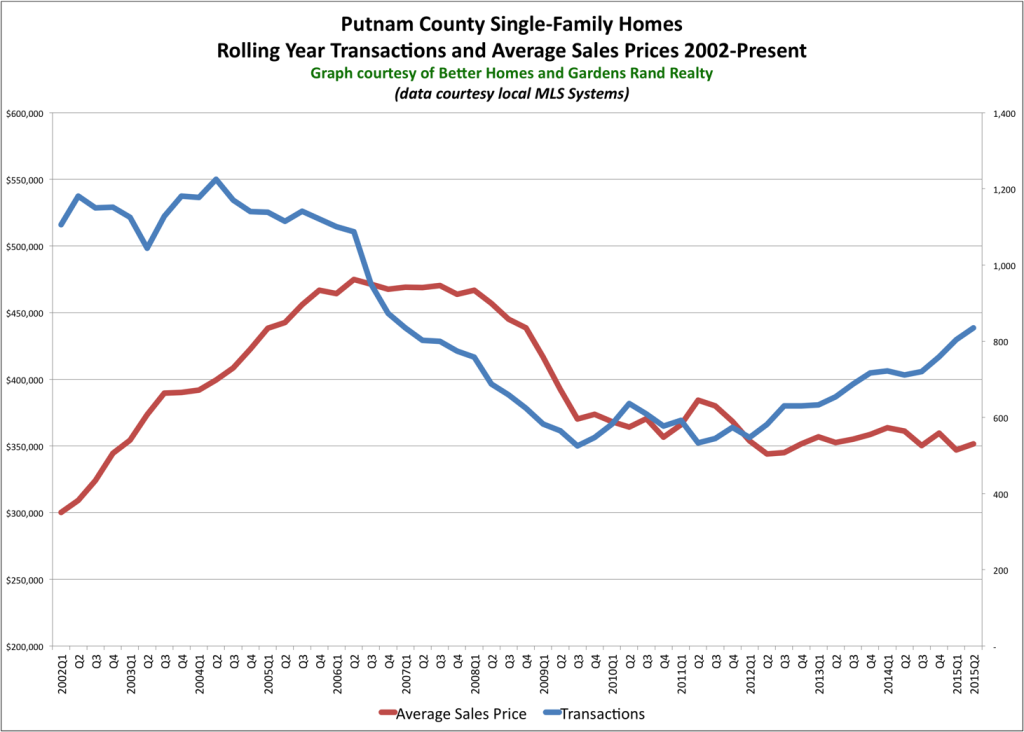 This week, Better Homes and Gardens Rand Realty is releasing its Quarterly Market Report for all the counties it services: Westchester, Putnam, Rockland, Orange, and Dutchess Counties in New York; and Bergen, Passaic, and Morris Counties in New Jersey. Below is an excerpt from the report, but you can get the full Report here.

The Putnam County real estate market rose again in the second quarter, with sales continuing to increase and now prices showing some positive signs of growth.

Sales. Putnam sales surged again in the second quarter, rising 18.2% and hitting the highest second-quarter total since 2007. Similarly, the 835 rolling year sales represented the highest 12-month total since 2007, at the height of the last seller’s market. All this activity has had its expected impact on inventories, with the average months of inventory for the rolling year falling to the lowest level (12.9) since 2006.

Prices. Last quarter, we noted an unexpectedly sharp drop in Putnam pricing, which we attributed simply to the small sample size and some outliers. This seems to be the case, since second quarter pricing was more consistent, with the average up 6.6 over last year, the median flat, and the price-per-square-foot down slightly. Over the longer-term, where we have a larger sample size, we’re seeing pricing down just slightly over the rolling year.

Condominiums. The small Putnam condo market spiked in the second quarter, with sales up almost 30-% from last year and now up 17.8% for the rolling year. And we’re now seeing some longer-term price appreciation, with the average up over 10% for the year.

Going forward, we believe that Putnam is poised for some price appreciation by the end of the year. Pricing has been sluggish, but with these clear indications of rising demand – activity up, inventory down – we think it’s a matter of time before homeowners start enjoying some modest price increases.