Right now is a really great time to be buying a home in Westchester or the Hudson Valley.

Man, do I hate saying that.  As I’ve explained before, I hate the phrase “great time to buy” for a couple of reasons.

Second, while markets tend to move together, we do see micro-markets (i.e., towns and villages) that defy larger trends.  So while it might be a great time to buy in Village A, it might be not so great in Town B.

Third, and most importantly, though, “it’s a great time to buy!”  just seems like a hack thing to say, the kind of thing that TERRIBLE real estate agents have said for generations to get unsuspecting and gullible people to buy an overpriced home. And I think that most people get suspicious when real estate agents talk like that.

Specifically, I want to make this specific point: the monthly payment you need to buy an inflation-adjusted average priced home in Westchester and the Hudson Valley is as low as its been in a generation. 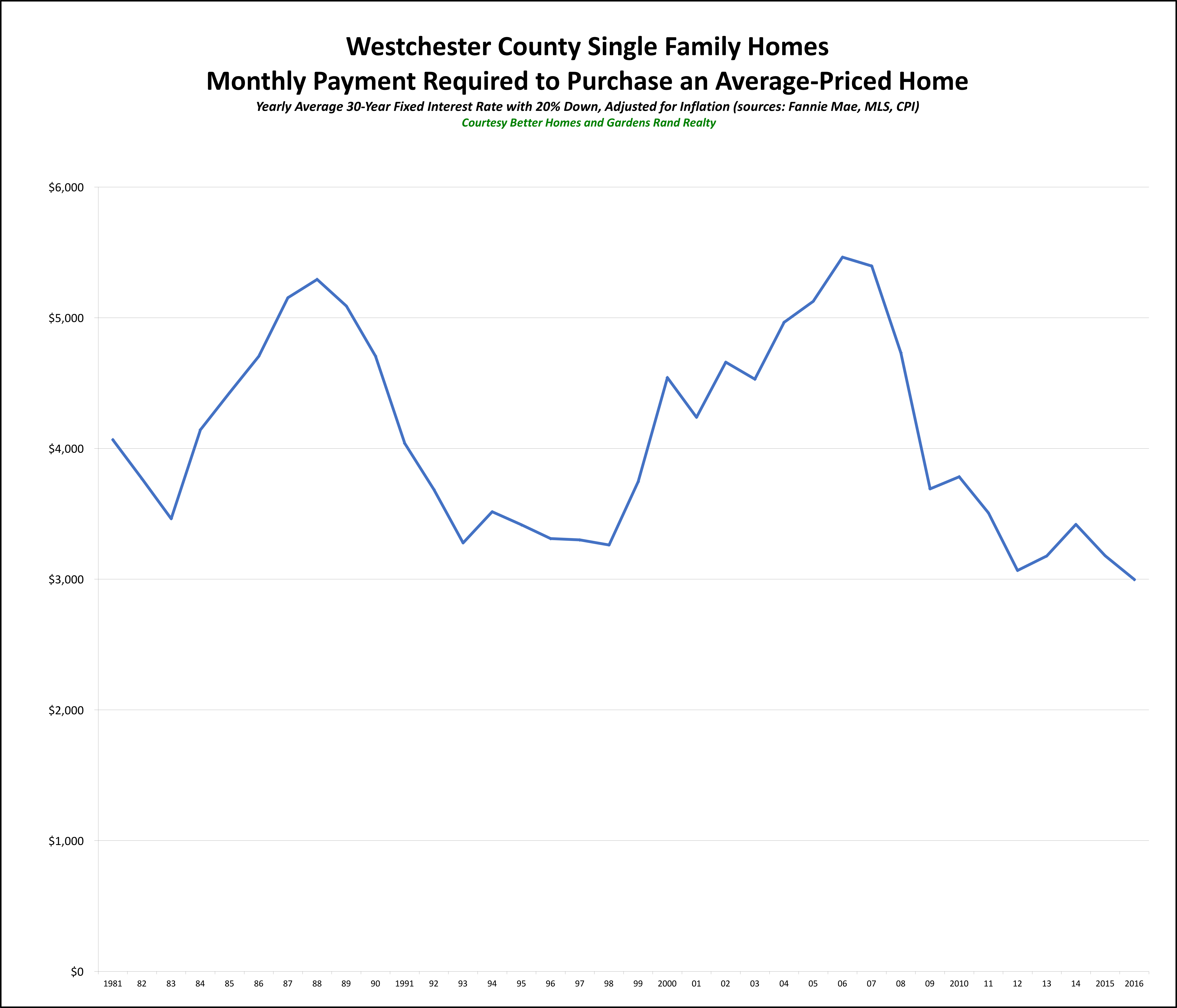 You can see the results on the graph. The monthly payment you have to make to purchase the average-priced home in Westchester is just about as low as it’s been in years. We saw the slightest uptick from 2012-2014, partially because of a slight increase in pricing and a slow inflating of interest rates. But the payment came down again over the past two years, with rates falling and prices stalling.

So why are monthly payments lower than they’ve been in a generation?  A couple of reasons:

And the same is true throughout the Hudson Valley.  I showed you Westchester first because we have good data on prices for the county going back all the way to 1981.   In other counties, our data doesn’t go back as far, but if we look at each of those counties you can see that it’s pretty much the same story for the time period we have. 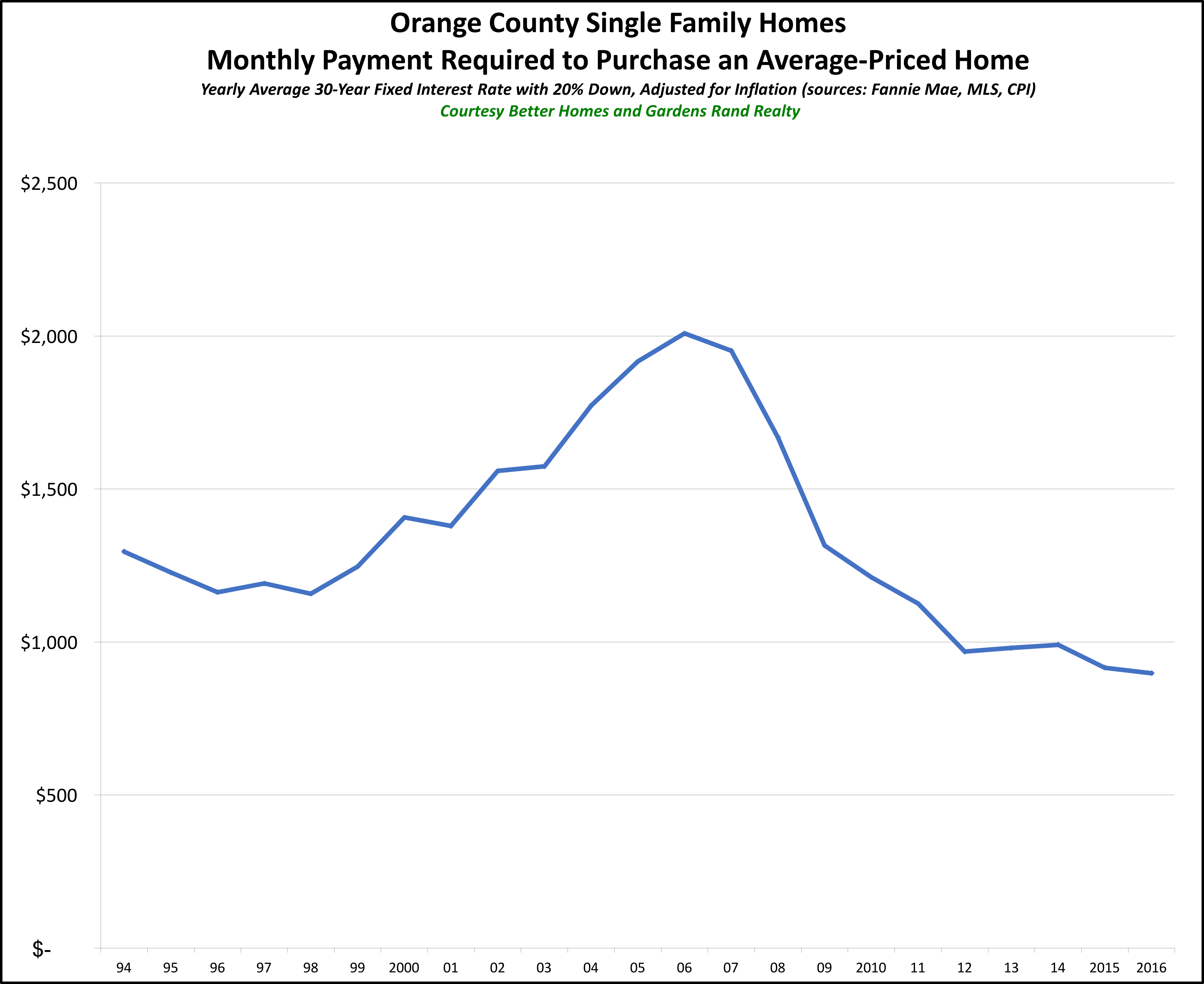 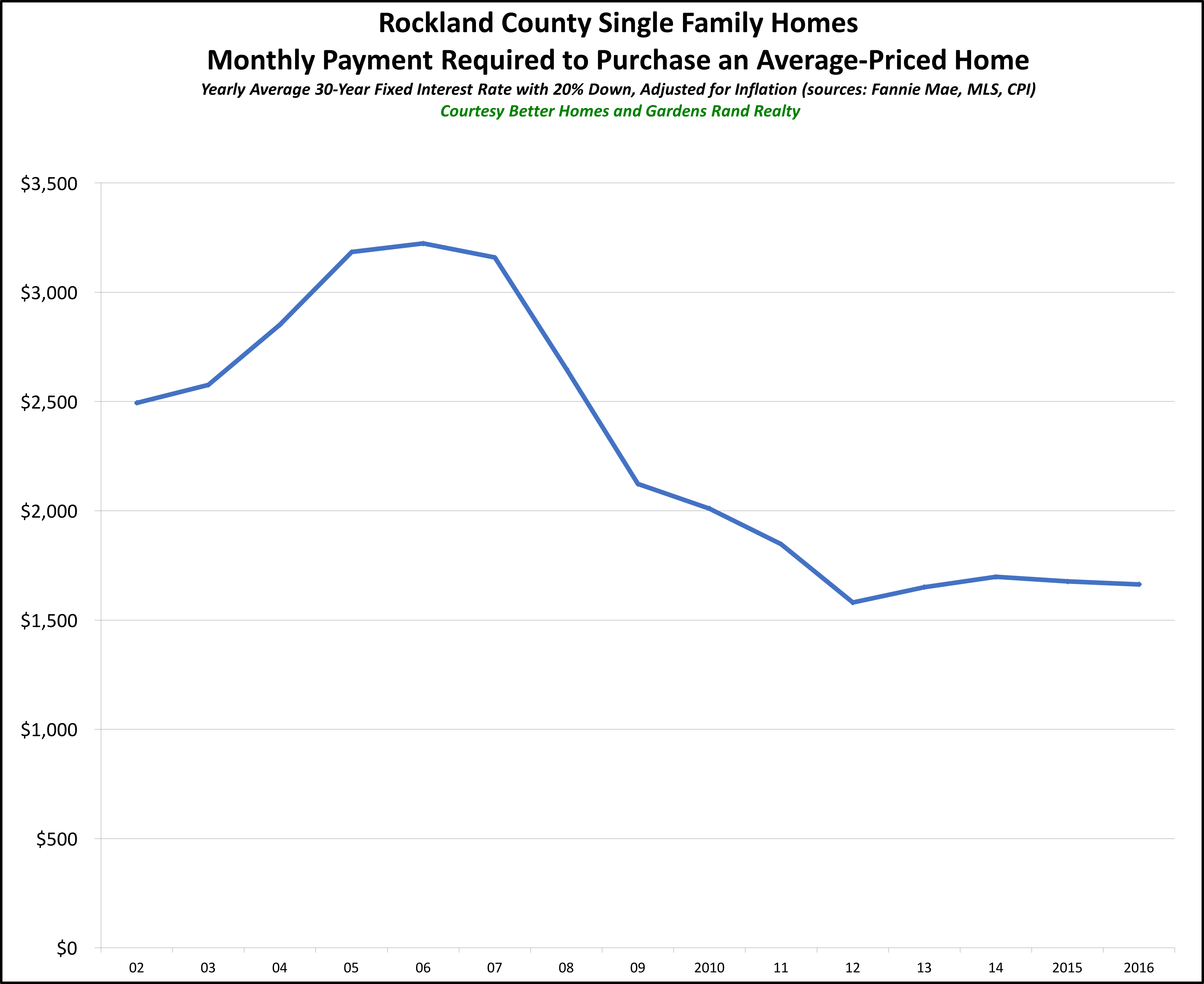 Again, you can see that even with a slight rise in the past few years, the monthly payment you have to make to buy the average-priced home in Rockland is lower right now than it’s been since at least 2002, and probably for quite a bit of time before that.

Putnam County.  Similarly, we have data going back to 2002 in Putnam, and the story is the same: 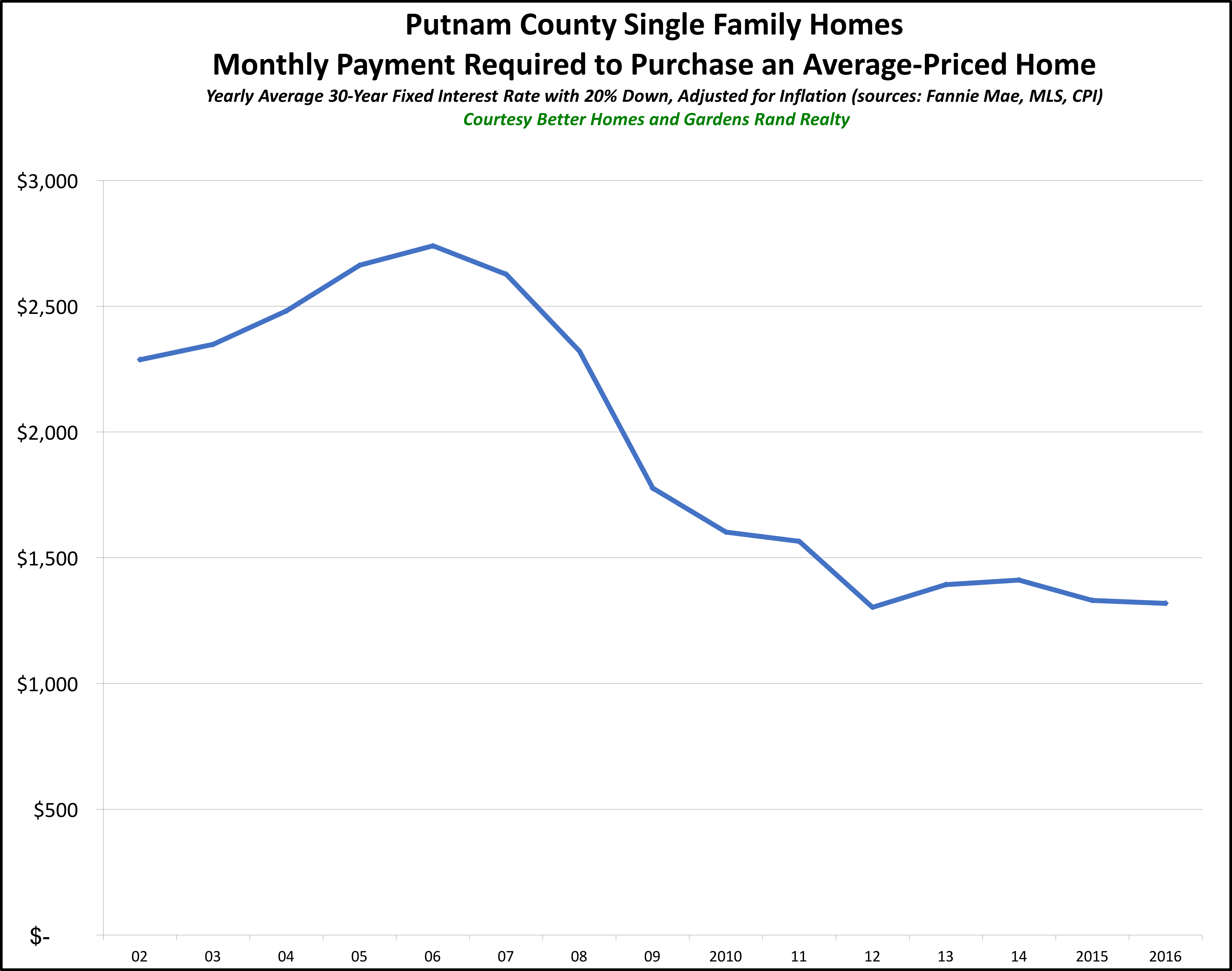 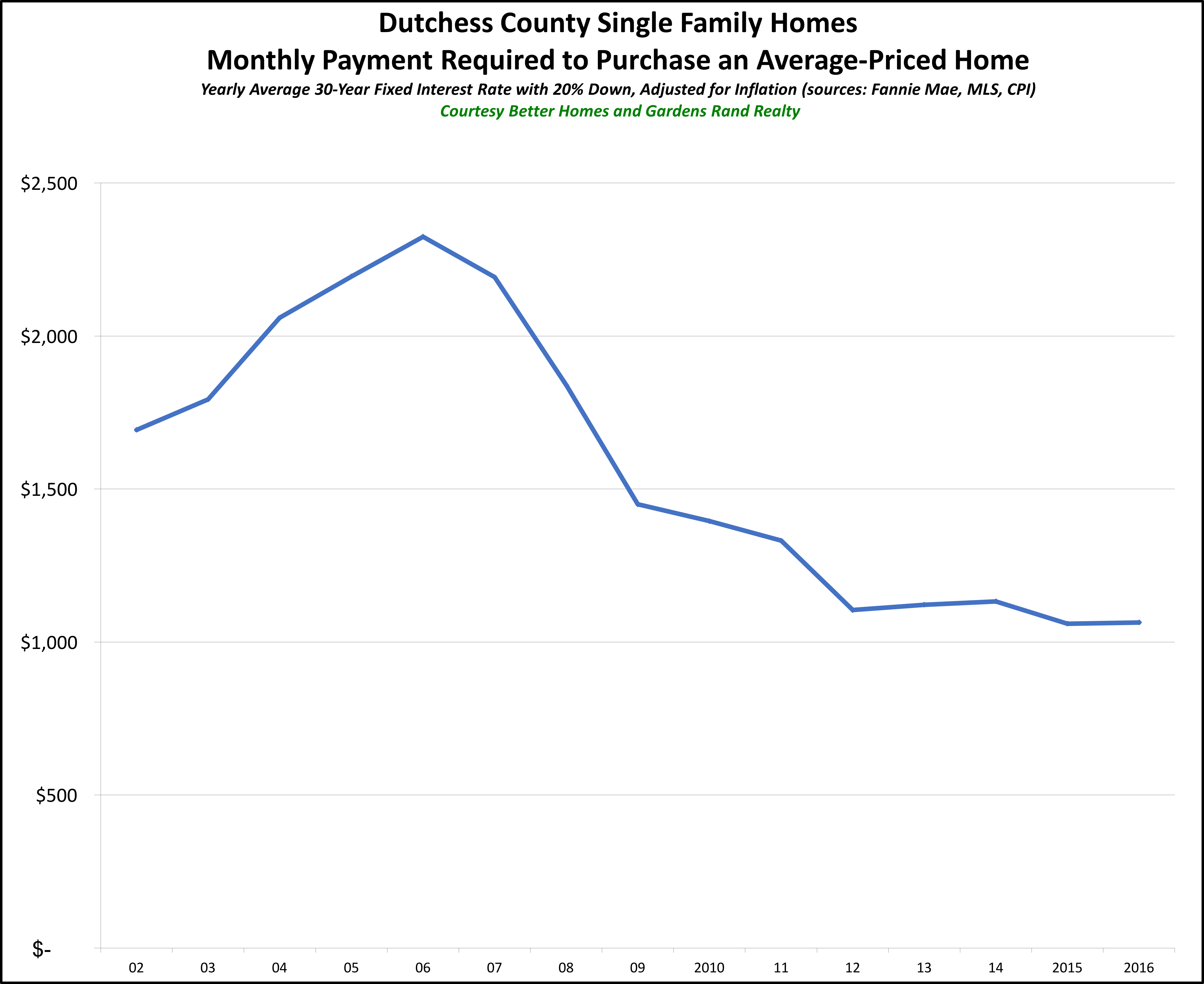 Condos and Coops.  All that’s for single-family homes.  What about condos and coops?  Well, we don’t have data going back as far, but in each county, condos (and coops in Westchester) show the same trend — the monthly payment to buy an average priced condo or coop in the region is lower right now than it’s been at any time since the 2005 era.  Here are the graphs: 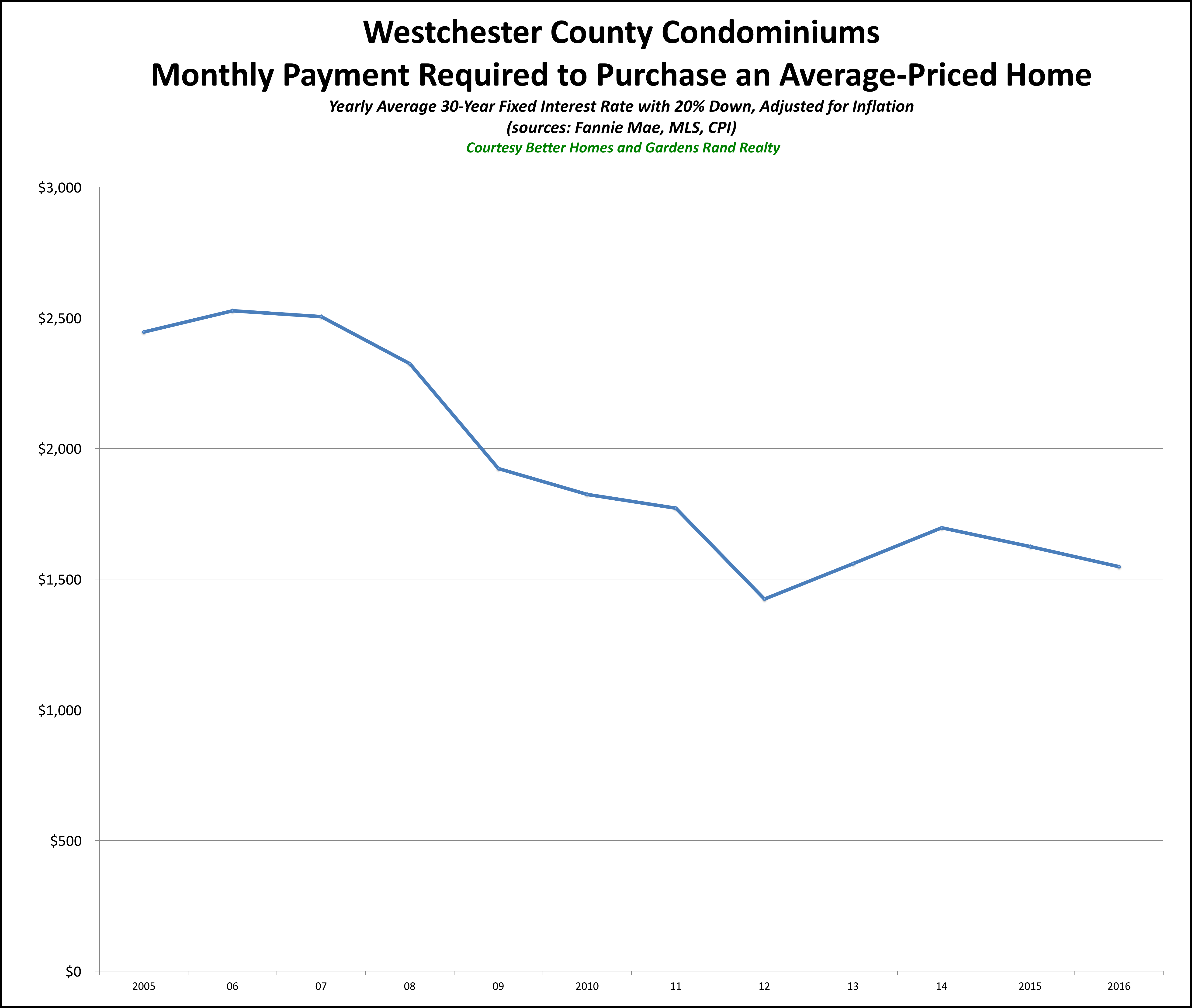 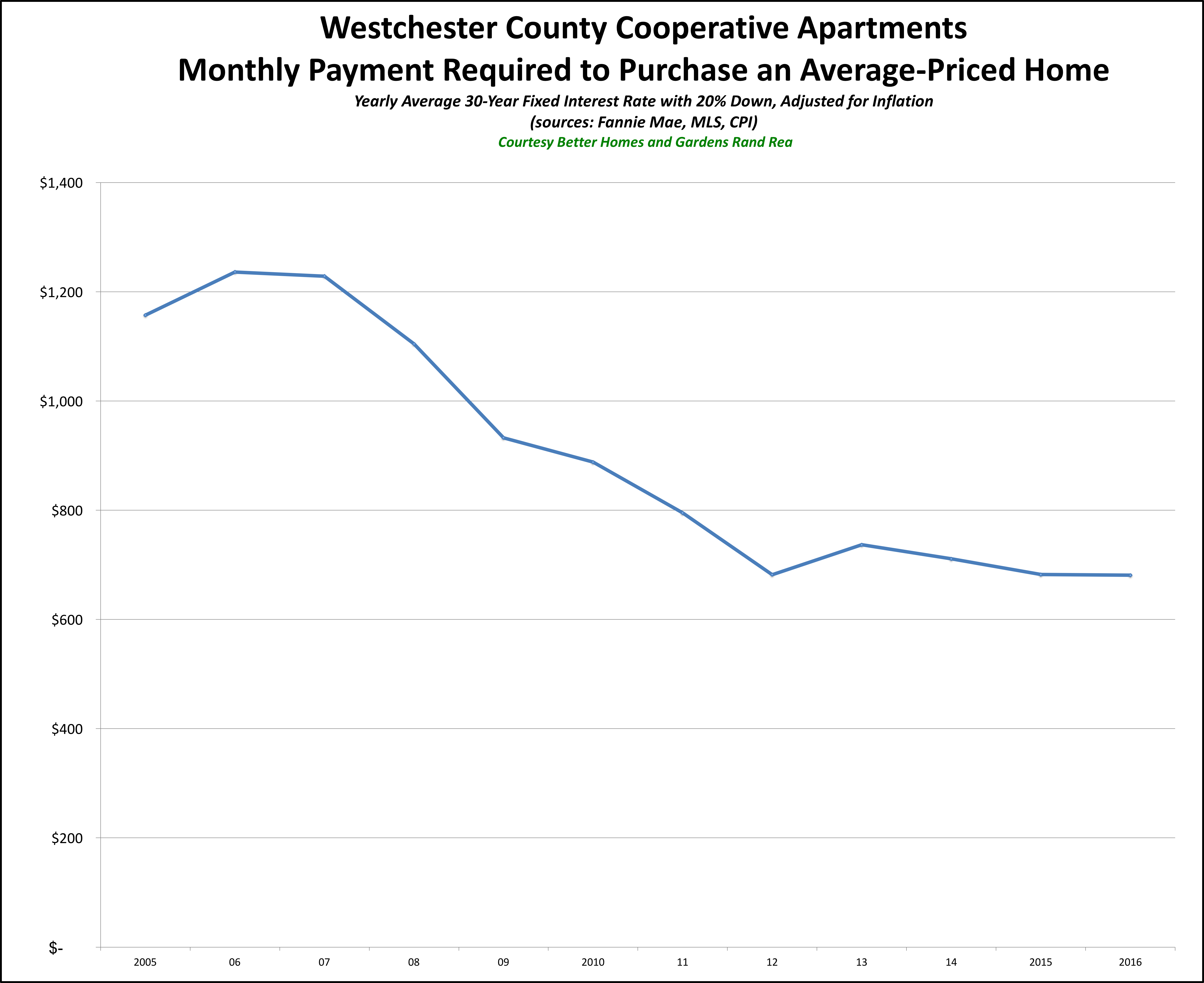 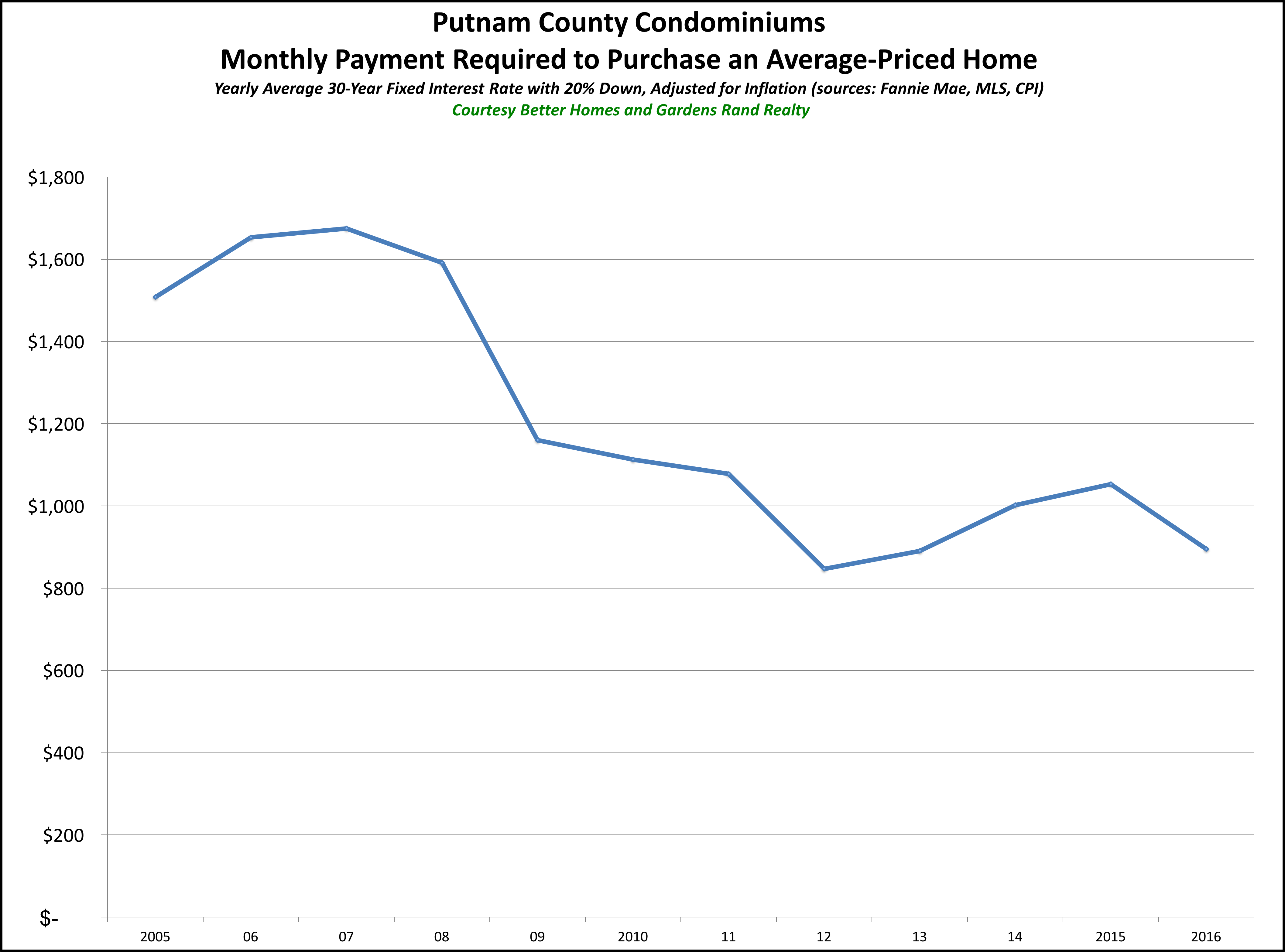 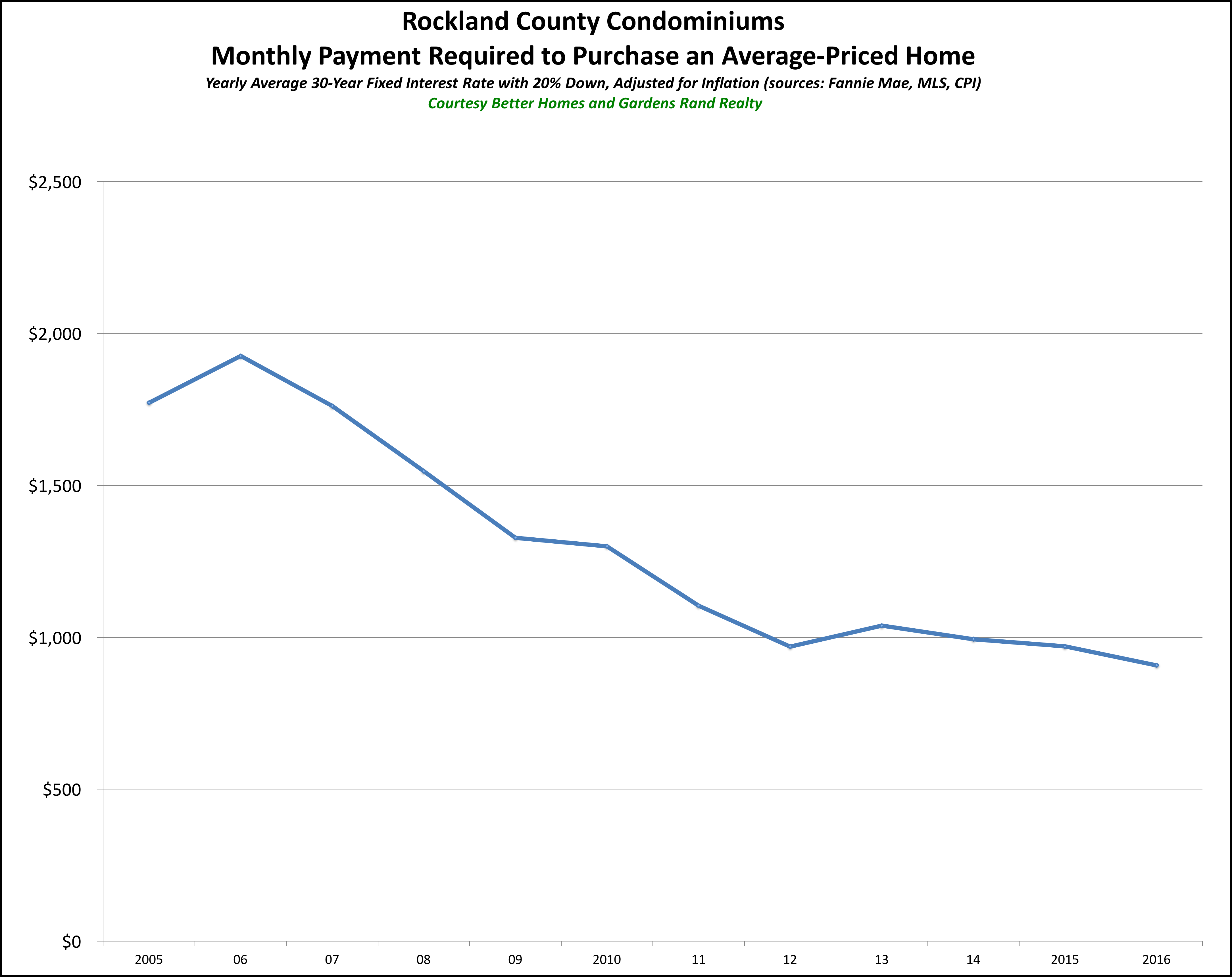 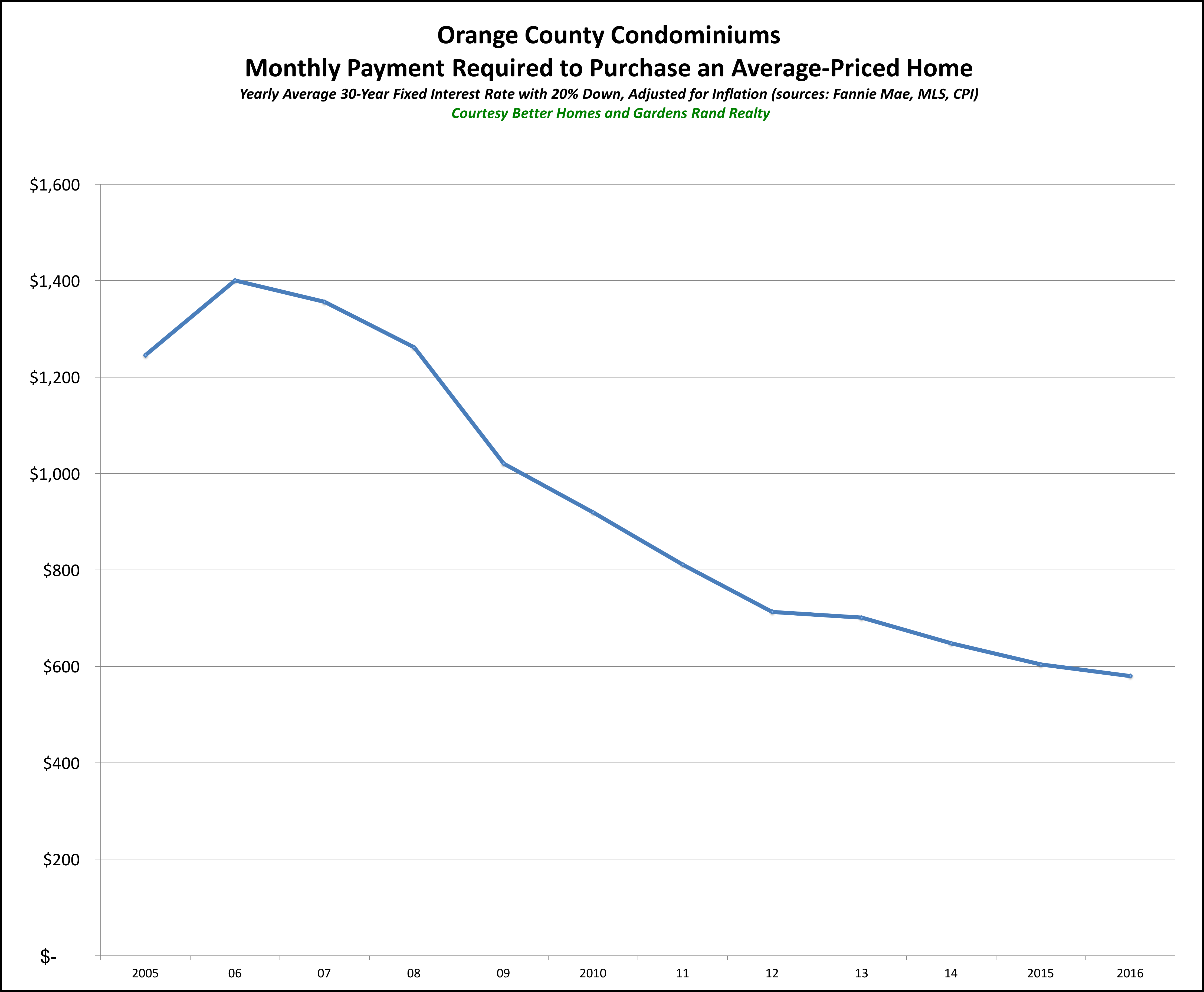 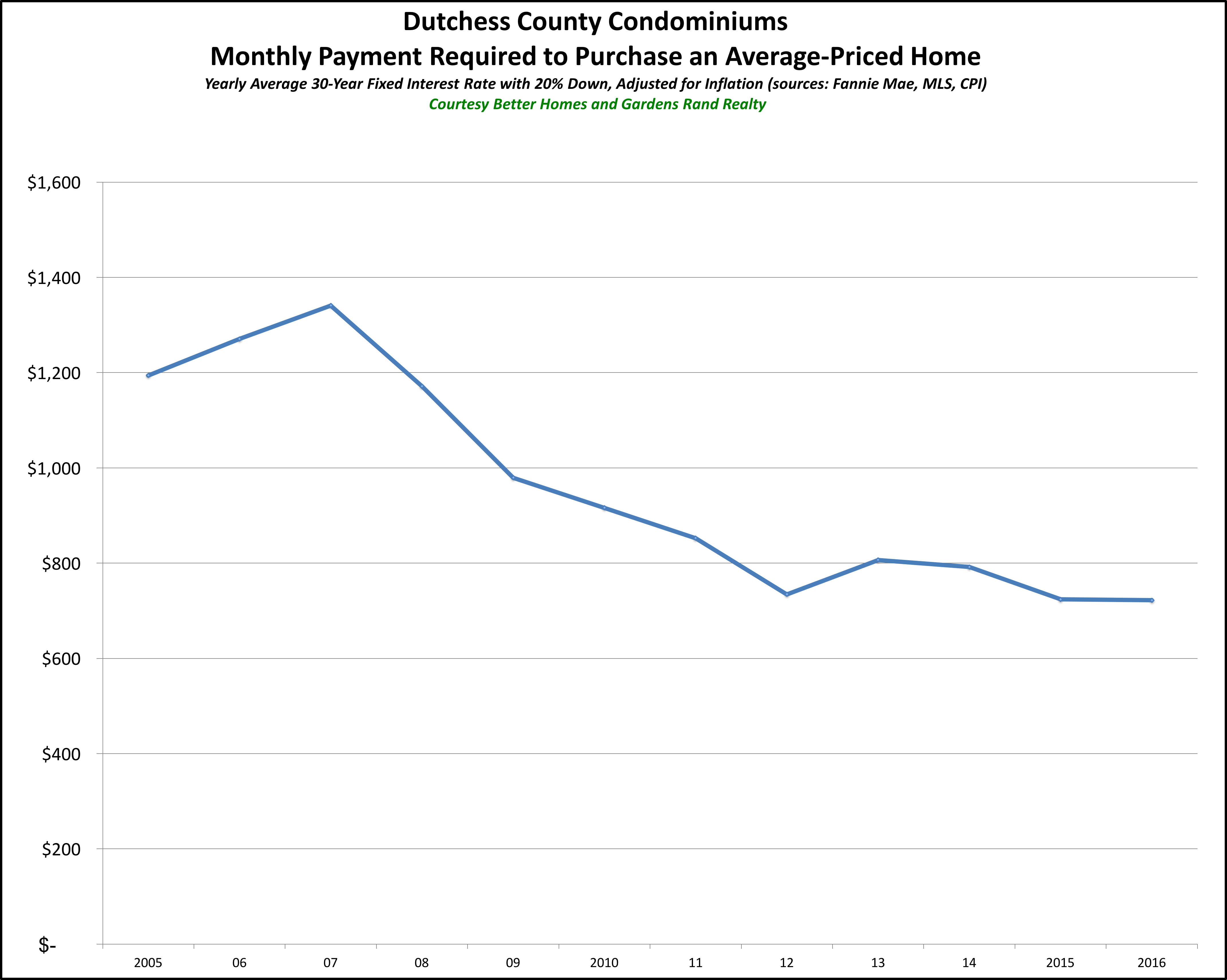 We wrote this up last year, and predicted that 2015 would be the last time we’d be able to say it.  Surprisingly, though, prices stayed flat for 2016 while rates stayed down, so we have yet another year where the real monthly payment you have to make to buy the average-priced home in our region is lower than it’s been in years.

Again, I HATE it when real estate professionals say that “this is a great time to buy,” because at many times in our history that has been bad advice.