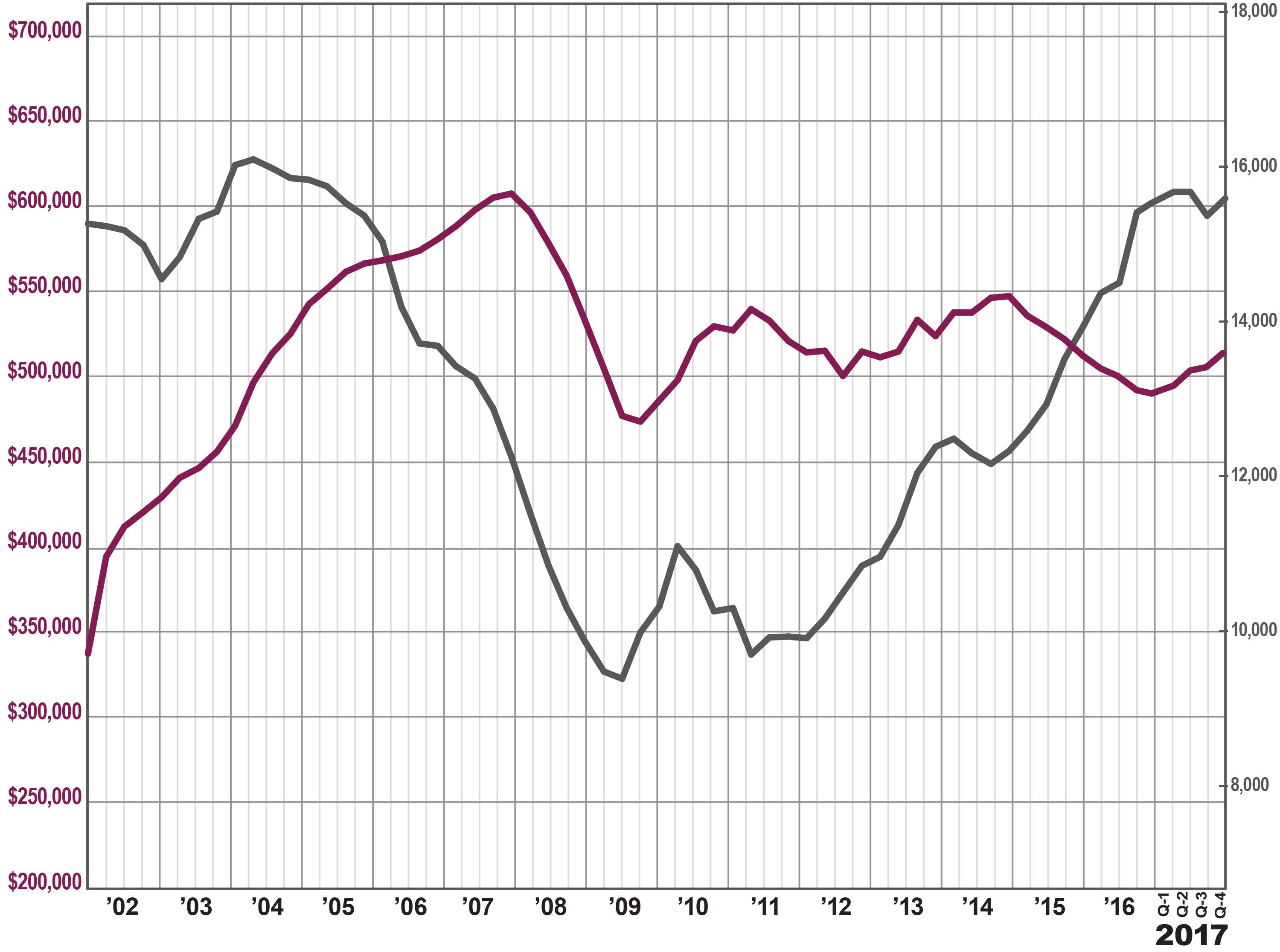 The housing market in Westchester and the Hudson Valley finished the year strong in the fourth quarter of 2017, with meaningful price appreciation throughout the region driven by low inventory and high demand. Although sales have slumped a bit due to the lack of available homes for sale, rising prices might tempt new sellers to come into this growing seller’s market.

Inventory throughout the region continues to fall. Regional inventory was down to 4.6 months. Historically, when inventory drops below the six month level, it usually signals a seller’s market, and many of the individual counties in the region are now at‑or‑below six‑months’ worth of inventory: Westchester single‑family homes are now at 3.5, Putnam at 4.7, Rockland at 4.0, and Orange at 4.7. The lack of inventory continues to stifle sales growth. Regional sales were up for the first time in three quarters, rising almost 6% from the fourth quarter of last year. For all of 2017, sales were up less than 1%, the lowest year‑on‑year increase since 2011. But the problem isn’t lack of buyer demand, which remains strong. Rather, it’s simply that we don’t have enough homes for sale to satisfy the existing demand. Even with the lack of inventory, sales are approaching record highs. The 15,489 regional single‑family home sales in 2017 marked the highest yearly total since 2004, at the height of the last seller’s market. Indeed, sales totals are now almost doubling what we saw at the bottom of the market in 2009. Most significantly, high demand and low inventory are driving meaningful price appreciation. The regional average sales price was up for the fourth quarter in a row, rising almost 3%. We are starting to see long‑term price appreciation, with the regional average price also up 3% for the year. Moreover, appreciation was widespread, with yearlong average prices up in every county in the region: 4% in Westchester, 2% in Putnam, 4% in Rockland, 5% in Orange, and 3% in Dutchess. This is the first time we’ve seen such shared prosperity in over 10 years. Going forward, we believe that prices will continue to appreciate through 2018. Demand is strong, bolstered by near‑historically‑low interest rates, prices that are still near 2003‑04 levels (without controlling for inflation), a generally strong economy, and sharply declining inventory. The question is if we will see sales growth, which will depend on whether homeowners see prices going up and decide to get into this market, bringing fresh new listings to satiate the existing buyer demand. All in all, this is what a seller’s market looks like. High sales totals. Low inventory. Rising prices. All the signs point to an extremely robust 2018 throughout the region. WESTCHESTER

The Westchester housing market finished strong in 2017, with a surge in prices even while a lack of inventory held back sales growth.

Sales. Home sales were up just a tick, rebounding a bit from their sudden decline in the third quarter. You can see the continued impact of a lack of inventory, though, with sales down almost 2% for the full year. Still, with over 6,100 sales for the year, transactions in Westchester are now at their highest level since 2005, and almost double where they were at the bottom of the market in 2009.

Negotiability. The negotiability indicators continue to signal the emergence of the seller’s market. Inventory declined again, falling over 8% and now at the lowest level of inventory we have had in Westchester in over 12 years, since the height of the last seller’s market. Similarly, for the full year, the listing retention rate was up, and the days‑on‑market was down, indicating that homes are selling more quickly and for closer to the asking price.

Going forward, we expect that Westchester will continue to see meaningful price appreciation in 2018, especially if inventory remains tight. With pricing near 2005 levels and interest rates near historic lows, we believe that the seller’s market will thrive in the new year.