How Much Are My Home Improvements Worth? The 2020 Cost v. Value Report is Out.

One of the biggest mistakes sellers make in pricing their home is assuming that they will get at least 100 cents on every dollar they put into that home since they bought it:

Unfortunately, it doesn’t work that way. You almost never get 100 cents, or even 75 cents, on every dollar you spend.

Why? Well, for one thing, you did that work according to your own tastes, and hopefully, you got a lot of enjoyment out of it.  But maybe your new buyer won’t love the granite countertops you chose or the way you organized your closets.  It’s not worth as much to them as it was to you.

For another, many home improvements involve equipment that you put in, which quickly starts to depreciate once you use it.  Homes appreciate, but the stuff in them doesn’t.  That new washer? It’s used. That new fridge? It’s worth 50% of what you paid for it the minute you plugged it in.

So if you never quite get 100 cents on the dollar for home improvement projects, how much do you get?  It’s tough to say.  The most bang for the buck is usually in anything that increases square footage or the number of rooms, the least comes from improvements that are based on depreciating equipment.

If you’re looking for a general guide to the return you can get on home improvement projects, Remodeling Magazine puts out a helpful guide every year called the “Cost v. Value Report,
which compares the projected return on different types of projects.  It’s not definitive, and its methodology is not based on actual real-life data.  But it’s a useful indicator of the relative perceived value of different times of home improvements.

Remodeling Magazine provides a national average and also breaks down the information for different regions of the country.  Here is the expected return on projects for mid-Atlantic states: 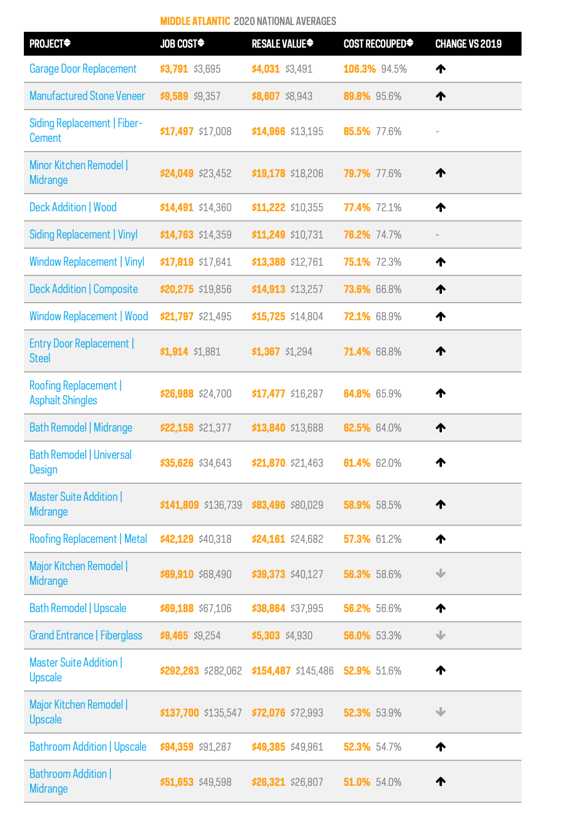 If you are thinking of doing some major renovations, you should talk to your real estate agent.  Why? Because they can help you in making decisions that will preserve or enhance the value of your home, and whether certain improvements are worth making.