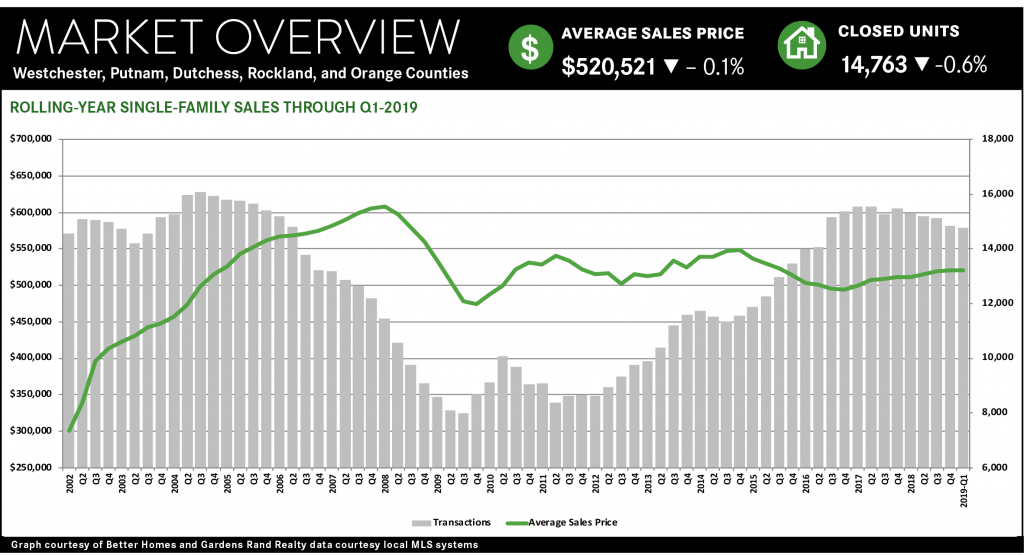 The housing market in Westchester and the Hudson Valley was a “tale of two markets” in the first quarter of 2019, with a sharp divergence between higher-priced and lower-priced counties. But we believe that the market is still poised for sales growth and price appreciation in what will be a relatively robust spring market.

Regional sales were down, but the results varied by county and property type. Regional single-family sales fell about 3% for the quarter, but that cumulative number masked a real divergence in the county results. For example, sales were down almost 5% in Westchester, 5% in Putnam, and over 15% in Dutchess, but they were up 8% in Rockland and over 1% in Orange. Results in the condo markets were also mixed, with sales falling in Westchester, Putnam, and Rockland, but up in Orange and Dutchess.

Similarly, prices were up regionally, but results were much stronger in lower-priced markets. For the region, the average price of single-family homes was up almost 2% for the rolling year, even with a slight tick down compared to last year’s first quarter. But, again, those cumulative regional results do not really tell the story, since price appreciation varied dramatically by county. Just looking at the longer-term trend for the rolling year, average prices were down a tick for Westchester single-family homes, but up sharply in all the other Hudson Valley counties: rising almost 4% in Putnam, over 4% in Rockland, over 8% in Orange, and over 11% in Dutchess. Moreover, price appreciation was much stronger in the lower-priced condo markets throughout the region. Rolling year average prices were up over 2% for the region, and up in every individual condo market, rising almost 1% for Westchester (and almost 4% for Westchester coops), 10% for Putnam, 4% for Rockland, 11% for Orange, and 7% for Dutchess.

Essentially, we are seeing a “tale of two markets,” with sales and price appreciation higher in lower-priced markets and property types. We believe this divergence has been caused by the 2018 Tax Reform’s cap on state and local tax deductions (“SALT Cap”). When the tax code implemented Tax Reform, we speculated that the SALT Cap might have a more significant impact on higher-end markets. Why? Because taxpayers in those markets are more likely to itemize their taxes and thereby feel the pinch of the $10,000 SALT Cap. But in the lower-priced markets, homeowners and buyers are more likely to be at income levels where they tend to take the standard deduction, meaning that the SALT Cap would have little effect on them.

The SALT Cap is not devastating the high-end markets – for example, the rolling year average price in Westchester was basically flat – but it is hampering what would otherwise be a fairly robust seller’s market.

Going forward, we still believe that the market is still poised for growth.

At some point, we expect the impact of the SALT Cap to get priced into the market, because otherwise the seller market fundamentals are very strong: the economy is growing, interest rates are near historic lows, inventory is relatively low, and homes are still priced well below their highs. Accordingly, we expect a relatively robust spring market throughout the region.