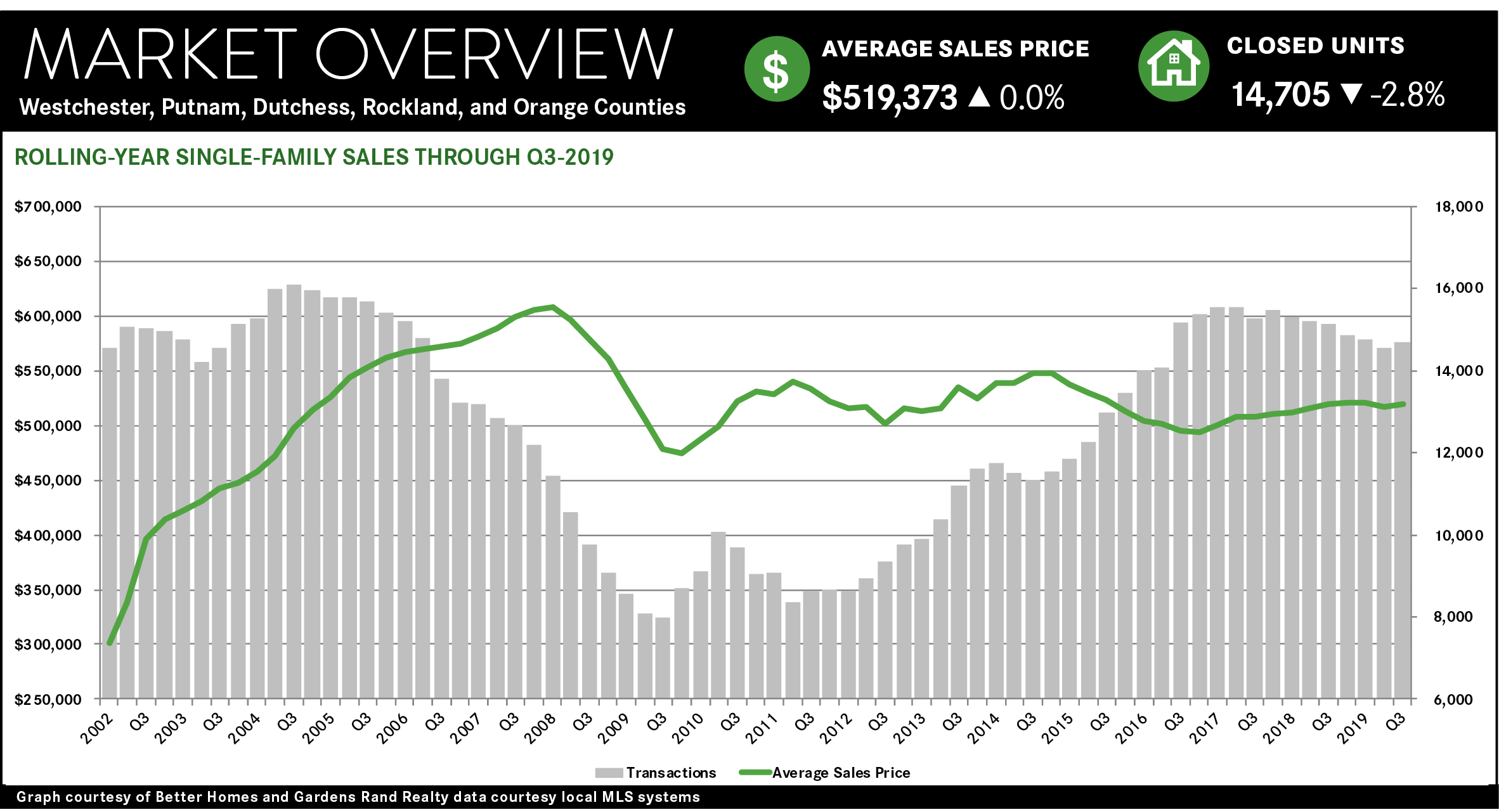 The housing market in Westchester and the Hudson Valley surged forward in the third quarter of 2019, showing the first signs of recovery from the suppressive effects of the 2018 Tax Reform Cap on State and Local tax deductions (i.e., the “SALT Cap”). With the higher‑end starting to recover, we expect the market will continue to strengthen through the fourth quarter and into 2020.

Single‑family sales were up regionally, and in every individual county. Regional sales rose 3.4% from last year’s third quarter, the first increase since the end of 2017 and the inception of the SALT Cap. Indeed, the 4,683 single family quarterly closings in the region was the highest total since the third quarter of 2017. Moreover, sales were up in every individual county, rising 1.2% in Westchester, 9.4% in Putnam, 8.2% in Rockland, 2.7% in Orange, and 3.7% in Dutchess. This surge in the third quarter moderated some of the declines earlier in the year, with the rolling year price flat and sales down 2.8%.

Similarly, single‑family prices were generally up across the region, reflecting some rising strength in the high‑end. Regionally, the average price rose 1.4% from last year’s third quarter, the first quarterly increase of 2019. Much of that was due to the first quarterly average price increase in Westchester since the inception of the SALT Cap. Indeed, we might be seeing a long‑awaited recovery in the high‑end Westchester market: sales of super‑luxury $3M+ homes rose 23% from last year’s third quarter, to the highest quarterly total in four years. That buoyed Westchester’s average sales price, which thus boosted the regional sales price.

Similarly, the condo and coop markets were torrid, with but prices spiking from a lack of inventory. Regionally, condo sales were down almost 3% from last year’s third quarter, and down a tick for the rolling year. But this is largely due to a lack of inventory, which remains well below the six‑month level that denotes a seller’s market. At the end of the quarter, inventory levels were at 3.3 months for Westchester coops, and at 4.1 months for Westchester condos, 5.3 months for Putnam condos, 4.7 months for Rockland condos, and 2.9 months for Orange condos. This lack of inventory is having its expected impact on pricing, with the regional condo/coop average price up almost 6% for the quarter and 7% for the rolling year, and rising in every individual county. Essentially, the lower‑end of the market has never been touched by the SALT Cap, so it’s simply experiencing the unfiltered effects of a robust seller’s market: low inventory that suppresses sales and boosts prices. This is what the entire market would look like had the SALT Cap never been enacted.

Going forward, we believe that the market is poised to finish the year strong. Housing fundamentals are all positive: prices are still at attractive levels compared to the last seller’s market, interest rates are back down to historic lows, the economy is solid, and inventory remains relatively low. Accordingly, we believe that strong demand will continue to grow, and that as the lingering effects of the SALT Cap dissipate, we will see more widespread price appreciation in the fourth quarter and into 2020.